At the start of February when we entered the space at Circus Street which – thanks to Cathedral Group – we had been given to house our first workshop, it looked like this…. 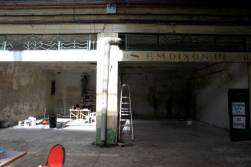 We had no tools, no furnishings – not even any bikes! But we had a few good people and a heap of goodwill.

The first thanks goes to Ian and Ian for immense practical work, fixing the lights and shutters, building the workbench and tool board and generally being capable and rocklike in getting his thing going. Also to all of the others – students at Sussex and especially the small group of homeless men who helped out with the painting. Ace – one and all!

Finally the bikes. The same day they this website went live we received three offers and they have been coming in steadily ever since but our big boost came from Brighton Station, who offered us 52 bikes which had been abandoned at the station and on trains to get us going. Transported in an electric vehicle by the fabulous Magpie co-op, they are an excellent assortment and will be back on the streets of Brighton as soon as we can manage.

So after two weeks work and a whole lot of help, our workshop now looks like this:

We had our official launch on February 14th (Caroline Lucas MP and Groundwork South Project Manager Duncan Blinkhorn cut the ribbon below) and will be open each Saturday henceforth from 11-3, with further dates to be announced, and next week we will be hosting the first Brighton Love Your Bike week. Do drop by.